The feast of Shavuot / Pentecost

Recently, when I sat down to write about the upcoming Shavuot (Pentecost) feast, I came to the conclusion that just as it is with anything that has to do with the Lord – the deeper you go, the more depth you still discover.  So I realised one article on such an important feast simply won’t do.  So I sat down to write a booklet on this significant feast of the Lord, called “Shavuot”.    I’d love to make it a special Shavuot offering and make this booklet available to you for a ministry gift of any amount, so you can dive deeper with me into the profound biblical meaning of this important feast of the Lord – Shavuot (Pentecost).  Here is an excerpt from the book:

When we think about Pentecost, we usually think first and foremost about new testament events, as it is written: “…wait for the promise of the Father” – the outpouring of the Holy Spirit. What Yeshua taught His disciples and what eventually took place in Jerusalem, those events are described in the book of Acts, second chapter.

However, the story of this feast has another side to is, as ancient as the Lord commandments, and it lies in Israel’s biblical culture, with its special meaning, teaching and prophetic proclamation pointing to future events predestined by God, whose fulfilment we see in the New Testament. 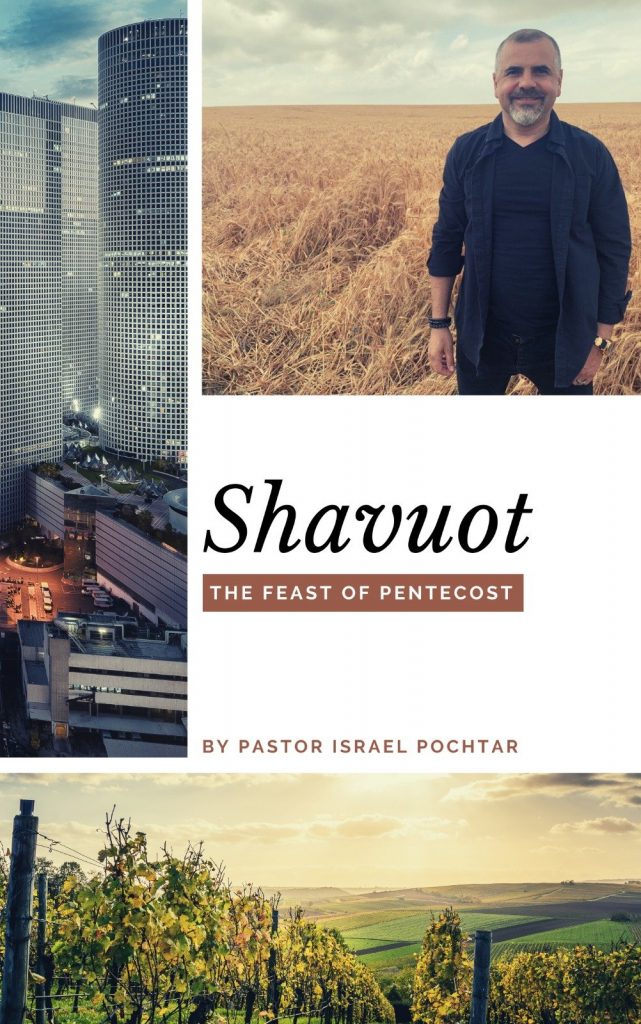 While studying the relation between the feast of Shavuot (Pentecost) in the Old Testament and its fulfilment in the New Testament, we will find a deeper connection, the fullness of God and how the prophetic message is fulfilled in our lives, while other aspects will be fully revealed in His Kingdom.

When speaking about the Biblical feast fo Shavuot it is important to emphasise the connection between the previous feasts, as well as the following ones, which will then reveal the entire plan of God and the relation between seasons; both spiritual and physical.

Brining the people of Israel out of Egypt, God gave them commandments they had to keep and live by, so they could serve the Lord, be under His covering, protection and blessing. Additionally to the main commandments, God gave Israel His feasts, saying, “These are my my appointed festivals”. These God-given festivals carried a message and a deep life-changing meaning. They included service to God and different types of sacrifices, however it is important to note that many of the commandments related to festivals were commandants to rejoice, to share about God and His works. Apparently, it was important to God that people not only gather together for prayers and sacrificial ceremonies, but also to celebrate as families in their households, passing on these festivals to their descendants; from father to son, to grandson, from one generation to another.

The Lord appointed His festivals when He brought Israel out of Egypt, and God himself is the author and initiator of these celebrations. When the Lord gave the people of Israel “His” festivals, He was in fact creating His own godly culture for them. It was absolutely new, unique, unlike any other culture out there, one that was to differentiate the people of God from all other nations. It was a culture of service to God that had a lot of joy and festiveness in it; with song, dance and celebrations in the Temple as a nation along with their priests, as well as with friends, neighbours and loved ones, all around the same table, filled with joy and children’s laughter. That was God’s culture. Even feasts around the family table were structured as a worship service, with its specific order of things, reading of scriptures, the head of the family would share a word, toasting, praying and most importantly – everything revolved around God, everyone spoke about God.   The first description of the feast of Shavuot can be found in the book of Leviticus chapter 23, but in order to further understand the importance and meaning of this feast, we need to take a look at the whole chapter from the beginning and note specific keywords, their message and their meaning in Hebrew.

Leviticus 23:1-2 – “And the Lord spoke to Moses, saying, “Speak to the children of Israel, and say to them: ‘The feasts of the Lord, which you shall proclaim to be holy convocations, these are My feasts.”

It’s important to note that God himself says these things to Moses, He is the one who tells us to keep the feasts, and He Himself calls them “the feasts of the Lord”. Despite many people referring to them as Jewish festivals, even I sometimes refer to them as biblical feasts since they are in the bible, it is actually God Himself who calls them His feast, or “the feasts of the Lord”. It is equally important to understand the meaning of the word Feast in Hebrew, because “feast” isn’t a literal translation, but more so a general idea. The word for feasts in Hebrew in Leviticus 23:2 is “Moadim” (מועדים).

God didn’t give the people of Israel “Jewish Festivals”, He gave His people what He called “The Lord’s feasts”. For all of us who believe in the word of God, who are followers of the Lord – these feasts are yours as well, because they celebrate what The Lord has done, not what the people have done.

For a gift of ANY amount, you’ll get the full digital version of the book on Shavuot in a series of teachings “The Lord’s Appointed Times”.