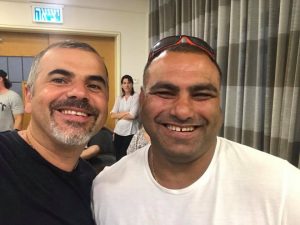 “When you seek me with all your heart… I will be found by you.”

When Eli was preparing to celebrate his Bar Mitzva — an important coming of age rite of passage in the Jewish faith, he had no idea that God was already pursuing him, even at the young age of 13. The night before his Bar Mitzva ceremony, Eli saw a dream that would haunt his life for 25 years.

In the dream he remembers walking down the street, with a sinister voice showing him riches, saying it could be his if only he would bow down to it. Even as a 13 year-old, he remembers vividly resisting it, saying: “I’m Jewish! I will bow down to nothing but God.” The voice continued showing him images of power, success, influence, saying it could all be his, if he were to only bow down. Eli resisted time after time. Then suddenly he found himself near a lake, it smelled horrible and he realized it was lake of sulfur filled with people calling for help. Eli was horrified, he couldn’t understand what he was seeing. He had never heard of hell, much less read its description in the New Testament. Eli was then taken by a figure that he likened to a godly or angelic creature, and as he walked down streets of gold, as he remembers them, a soothing voice told him: “Follow me. I will show you the way.”

He woke up and could never forget that dream. When he started asking about what he saw; rabbis, relatives, family members, they all told him it was nonsense and he was crazy. But the dream stayed with him. Fast forward 25 years. Eli’s background in a highly traditional religious family marked him in a powerful way, but the work God had started in his life at 13, He was going to complete, even if it took 25 years. The older Eli got, the more religious his family became. But the more he saw religion up close, the more he would see the falseness of it all. It had nothing to do with the “way” he felt he needed to find that was spoken about in his dream as a child.

Anwar is our dearest Bedouin brother, who along with his precious family have been so faithful and passionate about Yeshua since first meeting Him years ago. Since then, Anwar never misses an opportunity to share about the Lord. When he met Eli it was no exception. He shared the gospel with him, spoke about Yeshua and Eli felt oddly at peace with something he would naturally consider foreign to his traditional Jewish upbringing. It felt right. Anwar brought Eli to meet with me one day, since he couldn’t bring him to a service due to the COVID lockdown.

We spoke, opened the scriptures together, witnessed to him. Eli ended up receiving Yeshua into his heart and getting saved along with his entire family! Hearing about Yeshua and the gospel for the first time in his life not only did it not repel Eli, it made sense. Something inside him clicked. It was like homecoming. A completion to a 25 year old dream he could never forget.

God promised a 13 year old boy that He would show him the way if he followed Him, and he kept His word, even if it took Eli 25 years to get there.